Difference between revisions of "SeqShop: Variant Calling and Filtering for INDELs Practical, December 2014"

It also uses the bam.list file created in the SnpCall Tutorial. If you have not yet run that tutorial, please follow the directions at: GotCloud BAM List File

Curious if it started running properly? Check out this screenshot:

This should take about 2-4 minutes to run.

If you cancelled GotCloud part way through, just rerun your GotCloud command and it will pick up where it left off.

Let's look at the output directory:

Do you see any new files or directories?

Let's look at the indel directory:

Let's look at the indel/final directory:

Can you identify the final indel VCF?

Did I find interesting variants?

The region we selected contains APOL1 gene, which is known to play an important role in kidney diseases such as nephrotic syndrome. There are two risk alleles in protein-coding region of this gene.

First, look up the indels by navigating exome variant server. 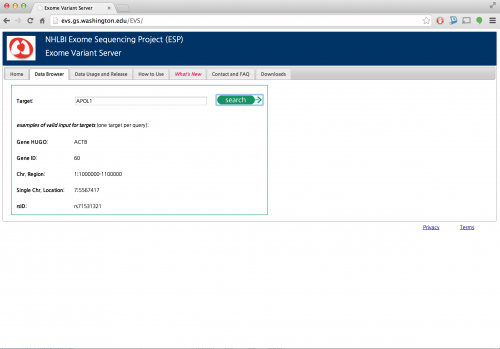 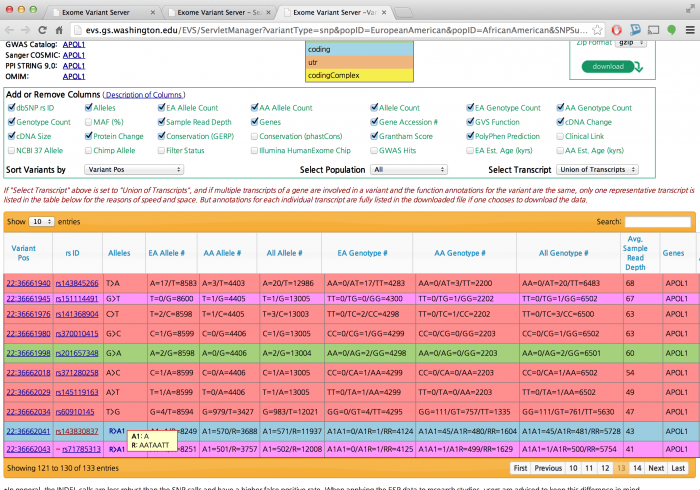 Let's see if we found the indel

Did you see a variant at the position?

Details of the output file

We will use Vt or tabix to look at the INDEL VCF file.

First, let's look at the header:

The header is as follows:

Using Vt, we can see the same output

Here is a description of the record's fields.

You can obtain the same output by using the following command

The key information fields are as follows:

The genotype fields are described as follows:

The following section details some simple analyses we can perform.

First you want to know what is in the vcf file.

The variants have filter labels. PASS meaning a passed variant and overlap, meaning that the variants are overlapping with another variant, implying multiallelicity.

We can count the number of variants with different filters with the following commands.

Comparison with other data sets

It is usually useful to examine the call sets against known data sets for the passed variants.

Commands outside of SeqShop Workshop:

Outside the workshop, you need to update indel.reference.txt to point to the reference files.

Edit indel.reference.txt and specify the correct path to ${SS}

Ins/Del ratios: Reference alignment based methods tend to be biased towards the detection of deletions. This provides a useful measure for discovery Indel sets to show the varying degree of biasness. It also appears that as coverage increases, the ins/del ratio tends to 1.

We perform the same analysis for the failed variants again, the relatively low overlap with known data sets imply a reasonable tradeoff in sensitivity and specificity.

Command outside of SeqShop Workshop:

This analysis supports filters too.

A slight digression here, when analyzing indels, it is important to normalize it. While it is a simple concept, it is hardly standardized. The call set here had already been normalized but we feel that this is an important concept so we discuss this a bit here.

Indel representation is not unique, you should normalize them and remove duplicates.

The following table shows the number of variants that had to be normalized and the corresponding type of normalization performed and the ensuing number of duplicate variants found for some of the 1000 Genomes Trio High Coverage call sets. Although left alignment seems to be a trivial concept, it is easily overlooked and remain a common mistake.

Another example is the Mills et al. data set which followed up with 10004 Indels for validation. Out of 9996 passed variants, it was found that after normalization, only 8904 distinct Indels remain - about a loss of 11% of variant thought distinct.

For chromosome 22, there are 121 variants, but only 106 distinct Indels after normalization - about a loss of 12% of variant thought distinct.

To normalize and remove duplicate variants for chromosome 22:

and you will observe that 43 variants had to be left aligned and 15 variants were removed.

Let's look at the last two variants that were normalized.

UMICH's algorithm for normalization has been adopted by Petr Danecek in bcftools and is also used in GKNO.