Difference between revisions of "Variant Normalization"

The Variant Call Format (VCF) is a flexible file format specification that allows us to represent many different variant types ranging from SNPs, indels to copy number variations. However, variant representation in VCF is non-unique for variants that have explicitly expressed reference and alternate sequences. A failure to recognize this will frequently result in inaccurate analyses.

On this wiki page, we describe a variant normalization procedure that is well defined for biallelic as well as multiallelic variants. We then provide a formal proof the procedure's correctness.

The normalization of a variant representation in VCF consists of two parts: parsimony and left alignment pertaining to the nature of a variant's length and position respectively.

In the context of variant representation, parsimony means representing a variant in as few nucleotides as possible without reducing the length of any allele to 0. It is a property describing the nature of the length of a variant's alleles and is defined as follows:

Taking the example below, the Multi Nucleotide Polymorphism (MNP) is represented superfluously for the first 3 representations and parsimoniously for the 4th representation. When a variant has superfluous nucleotides on the left side, it is defined as not being left parsimonious as there is a need to left trim. The concept is symmetric for right parsimony and trimming. Parsimony applies to Indels too which we shall demonstrate in the left alignment section. 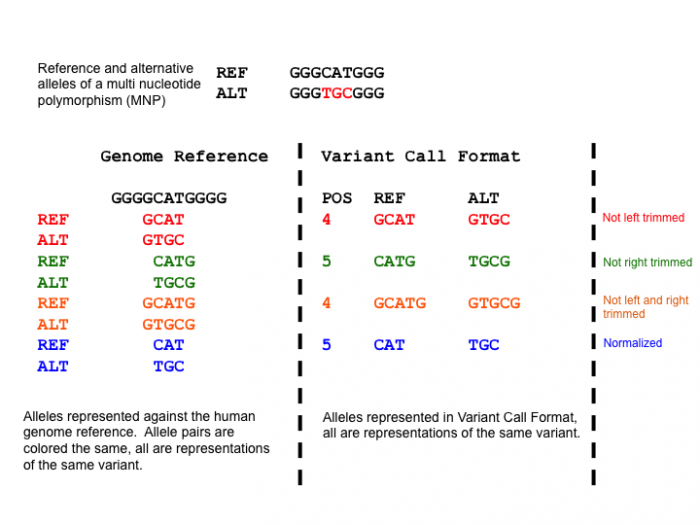 Based on the definition of parsimony, it is easy to see that:

However, the converse is not true.

Left aligning a variant means shifting the start position of that variant to the left till it is no longer possible to do so. It is a concept associated with insertion and deletion variants and describes specifically the nature of a position of a variant as opposed to its length. In order to further differentiate left alignment from simply left padding a variant, the definition is as follows:

The following figure shows examples of an unnormalized short tandem repeat which is a special class of indels. The color of the text is synchronized to the variant that is described in the figure. 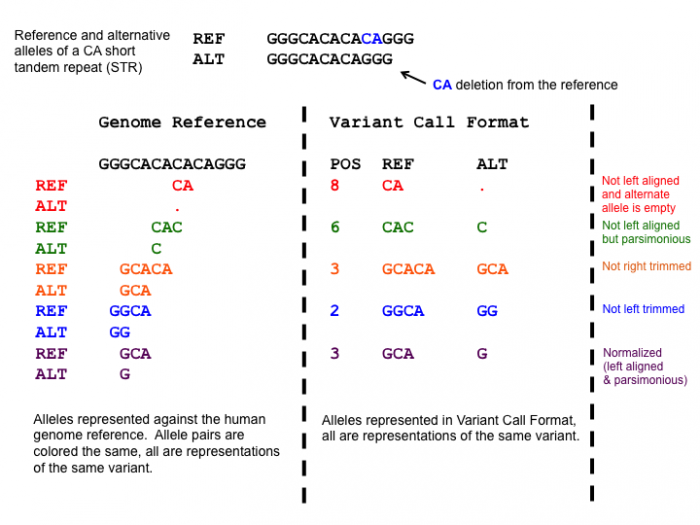 When is a variant normalized?

In order to detect if a variant is normalized, we first prove the following lemma (1).

For the => direction, we prove the contrapositive :

We first assume an indel is already left aligned and right parsimonious. Suppose all alleles have a length greater than 1, since the indel is right parsimonious; clearly, each allele do not end with the same type of nucleotide. Now, suppose that there exists an allele of length 1, and that all the alleles end with a particular nucleotide say 'A'. This is still considered right parsimonious as there are no superfluous nucleotides to remove without resulting in an empty allele. It is possible to extend all the alleles one position to the left by copying from a nucleotide on the reference genome, so now we have a superfluous nucleotide on the right side. Trimming off that nucleotide results in a new representation that shifts the indel to the left by one position while retaining the allele lengths of the original representation. This is left aligning the indel and thus there is a contradiction. Therefore each allele cannot end with the same type of nucleotide.

Suppose a variant is not right parsimonious, then by definition, the rightmost nucleotide is the same for all alleles which may be removed.

Now suppose there are 2 normalized variants A and B. Suppose A is at a different position from B and B is to the right of A (without loss in generality), this is not possible because by the definition of a normalized variant, it is left aligned, and if they were at different positions, that means B may be left aligned to A since they represent the same variants leading to a contradiction. So A and B must be at the same position.

Now, suppose that A and B are at the same position but are of different lengths where B is longer than A (without loss in generality), this is not possible as B is then not parsimonious, so B can be trimmed to the same length as A.

Thus A and B have to be at the same position and have the same length and variant normalization is unique.

So now that we know how to tell if a variant is normalized, we simply need to manipulate the variant till the rightmost ends of the alleles are not the same, and apply truncation to the superfluous nucleotides on the left side of the variant to obtain a normalized variant. The algorithm to normalize a biallelic or multiallelic variant is as follows:

The following table shows the number of variants normalized for an anonymous data set. This analysis was done on 20 May 2014.

Issues have been communicated to bcftools and gatk developers on 20 May 2014.

The following table shows the number of variants normalized for an anonymous data set. This analysis was done on 22 May 2014. bcftools was updated.

Here is an example where this normalization algorithm fails

We distinguish the concepts of normalization and decomposition/reconstruction of variants as follows:

Decomposition of variants involves the breaking down of a variant record into multiple records. It may be done vertically - as in multiallelics becoming biallelics or it can be done horizontally - a cluster of indels and SNPs represented as a complex variant being splitted up into several records. Horizontal decompositions in general do not have a unique solution. Similarly, reconstruction combines several variant records into a single record and can be done vertically and horizontally too. Vertical decomposition of a multiallelic variant to a set of biallelic records is a many to one function. Construction of a set of biallelic variants into a multiallelic record is not unique as you need to considered all possible permutations of the haplotypes containing your alleles.

If your example contains the decomposition or reconstruction of variants, then it is probable that you can find inconsistencies.

When performing decomposition and construction, I think the following factors should be considered:

Depending on the context, you will obtain different answers.

An example of inconsistent variant representation due to using vt normalize

This page is maintained by Adrian.