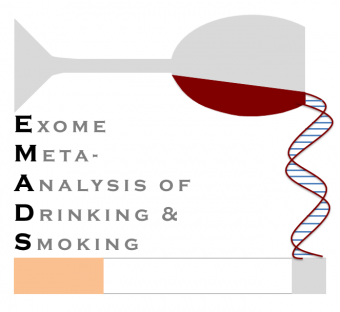 Welcome! This is an informational page devoted to the EMADS consortium, the exome meta-analysis of drinking and smoking.

If you're looking for the analysis plan see this page: Analysis Plan.

If you are interested in contributing to the consortium please email Scott Vrieze or Goncalo Abecasis.

EMADS is a collaborative effort of many studies to investigate the potential role of rare exomic variation on drinking and smoking phenotypes. Through the effort we hope to extend results of previous GWAS meta-analyses of drinking and smoking as well as identify novel genetic associations. As of this writing over 20 studies plan to contribute a total of 120,000 samples. Several other studies hope to contribute but, given the novelty of the exome chip genotyping array, are awaiting completion of genotyping.

We use the exome chip as the primary genotyping technology because larger samples have been genotyped on the exome chip (compared to sequencing). However, studies with sequences are more than welcome and can easily be included in our current analysis efforts.

We have a primary teleconference on a monthly basis. Senior and junior investigators from each site contribute to consortium planning.

The current primary goal of the EMADS consortium is an exome-wide analysis of nonsynonymous variation in smoking and drinking phenotypes.

We hope to expand the list of possible projects using the data available through our consortium. These may include a project headed by LiShiun Chen, Nancy Saccone and Laura Bierut on detailed analysis of the chromosome 15 region and smoking.

While we have no strict policies or procedures, there are a few best practices guidelines to consider.

While authorship is decided on an individual basis for each paper (depending on contribution), typically, authorship is arranged in groups. We hope the GIANT investigators will forgive us for adopting their authorship guidelines.

Guidelines for Handling Proposals for Additional Analysis of EMADS Data

In consultation with Goncalo, Scott will receive and coordinate proposals for discussion during regular conference calls.

At the time of this writing (5/7/2013), all summary statistics will be protected on University of Michigan servers, and curated by Scott and Goncalo. Proposals that call for analysis of existing data will be discussed by local site principal investigators. Note that some principal investigators may have to obtain permission from committees overseeing their study before sharing summary statistics from that study (e.g., for very large and/or complex cohorts). If approved, these proposals will be granted access to selected portions of the summary statistics. Any manuscript generated from these secondary analyses must not be submitted for publication until the primary EMADS manuscript has been accepted for publication.

In general, we expect most if not all proposals for secondary analysis of existing summary data to be approved.

Proposals that request local sites to perform additional analysis will be more difficult to implement. In the end, such proposals will be "at the mercy" of local sites, who may or may not agree to conduct the proposed analyses. Such proposals can be discussed on conference calls and local sites may volunteer to participate.

Authorship for Publications Resulting from Proposals

The EMADS consortium should be listed as an author, if possible, in any resulting publication. If listing a consortium is not possible, for example due to journal guidelines, then individual EMADS investigators may be listed. Further, depending on the level of involvement from EMADS members in facilitating fulfillment of the proposal's aims, individual investigators may be named as well.

Summary statistics of genetic variants are not truly de-identified, as they can still be used by a sufficiently sophisticated and motivated person to re-identify individuals. This concern must be taken very seriously, and any proposal to use EMADS data, even if only summary statistics, must have a plan to assure the safety and security of the data, protect against its re-release, and must guarantee that there will be no attempt to re-identify the data.

Please submit proposals to use EMADS summary data, or to suggest additional analysis, to Scott Vrieze. Please include the following information: